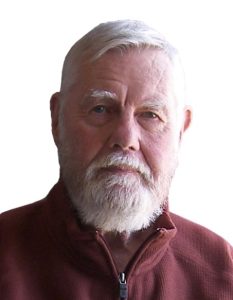 Charles Douglas Maginley was born in 1929 in Antigua, West Indies. As a child, he lived in Antigua and the neighboring island of Montserrat. From an early age he was fascinated by ships and boats of all kinds and in January 1945 he went to Britain to join the well-known Merchant Navy school ship, HMS Conway. On leaving the Conway in 1947 he joined Furness Withy and Company and sailed world-wide as a cadet and as third and second officer. His ships included the passenger ships Queen of Bermuda and Ocean Monarch and other Furness vessels based at New York.

In 1955 he joined the Royal Canadian Navy and served in HMCS Wallaceburg, Fortune, St.Croix and the aircraft carrier Bonaventure, besides staff, shore and exchange appointments. He commanded HMCS Fundy and Chaleur and retired as a Lieutenant-Commander in 1976. Putting his merchant service experience and qualifications to use, he joined the Canadian Coast Guard as a Ship Safety Inspector.  In 1978 he transferred to the Coast Guard College in Sydney, Nova Scotia, as an instructor and later head of the Navigation Department.

At the end of 1989 he retired and, with his wife June, settled in Mahone Bay on Nova Scotia’s South Shore. However in 1998 they moved to Ontario for two years while Charles worked on his histories of the Coast Guard and its predecessors. The first book (with Bernard Collin), The Ships of Canada’s Marine Services, which covered Canadian Government fleets from the 1850s, was published in 2001 and the second, a general history, The Canadian Coast Guard 1962-2002, in 2003. Both were issued by Vanwell Publishing of St. Catharines, ON and a French version of the history by Éditions Étendard, Mahone Bay also in 2003. The present book, The Canadian Coast Guard Fleet 1962-2012, (Long Hill Publishing, Mahone Bay) updates and expands the first volume while keeping to the time period 1962-2012, the Coast Guard’s first fifty years. For this endeavour he is joined not only by Bernard Collin but by Ron Barrie who had previously worked with Ken Macpherson on similar volumes about Canadian warships.

Charles (or Doug as he is known by his seafaring friends) is a member of the Canadian Nautical Research Society, the Company of Master Mariners of Canada and the Naval Officers’ Association of Canada. His interest in nautical matters is undiminished and he has other books planned.

Historian Charles D. Maginley spoke via video to a Life Long Learning class at the University of Alaska about Canadian policies and attitudes towards activities in the North by other countries, and in particular the voyages of the tanker SS Manhattan in 1969 and 1970.

His talk (video below) was followed by a live Q&A session via Skype.