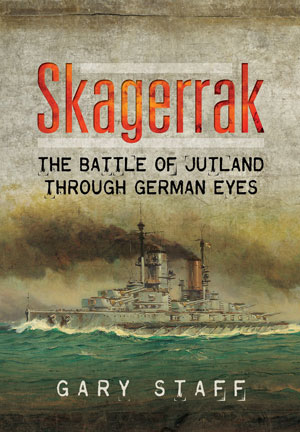 Gary Staff is the author of numerous books about the Imperial German Navy, its ships and battles. This book describes the battle of Jutland (Skagerrak in German terminology) making use of official documents but much enlivened by the letters and individual descriptions of officers and crew members who were there. Like the Dewar brothers’ Jutland:The Naval Staff Appreciation (with commentaries, by Schliehauf and McLaughlin) reviewed at this link, it provides a detailed account of all phases of the battle but gives a much more vivid impression of what it was like to be there.

The first chapter describes the operations carried out by the German High Seas Fleet from January 1916 when Vizeadmiral Scheer assumed command to the middle of May. During this time there were two sorties by the Germans and one by the British which might have resulted in engagements between the fleets. The first was in February by a large number of torpedobootes (equivalent to British destroyers) that encountered nothing more than a few minesweepers. The other was the bombardment of Lowestoft and Yarmouth by the panzercruisers (battlecruisers) on April 24th. This was an elaborate operation supported by submarines and zeppelins. The weather was severe and there was no encounter between heavy units. Then on May 4th the Grand Fleet under Admiral Jellicoe with the battlecruiser fleet commanded by Vice-Admiral Beatty attempted to entice the High Seas over mines and submarines to a gunnery action, at the same time mounting an air raid on the zeppelin base at Tondern. Neither aim was successful but Jellicoe’s fleet had penetrated even closer to the Jutland peninsular and Horns Reef than they would at the end of the month.

The next chapters describe the battle of May 31st – June 1st in much the same way as the Dewars have done, dividing it into time periods of variable length during which significant actions or manoeuvres took place. Excellent diagrams support each section and the personal reminiscences of participants vividly recreate the scene.

Most readers will already be familiar with the general trend of the battle:

Gary Staff is an enthusiast for the German panzercruisers and they are analysed and illustrated in several of his books. Vizeadmiral Hipper’s engagement with Beatty’s forces show how effective and tough these ships were. During the run south Beatty lost two ships, Indefatigable and Queen Mary, by magazine explosion and a third British battlecruiser, Invincible, is later lost for the same reason. With his five panzercruisers, Hipper was facing ten ships, four of them of the Queen Elizabeth class, the most powerful battleships in the world. The Germans were terribly battered, most of their armament out of action but they did not explode and they could keep up their speed even partially flooded. Eventually Hipper’s flagship Lutzow (he had transferred to Moltke) was reduced to slow speed and succumbed. The only other German capital ship lost was the pre-dreadnought Pommern, torpedoed during the night. The High Seas Fleet battleships were hit many times but appeared virtually unsinkable. Neither Staff nor the Dewars raise the issue of defective British fuses that exploded on impact and so prevented penetration of armour nor of the British practice of accumulating charges in and below the turrets and leaving doors in the supply chain open in the interests of rapid fire that contributed to the magazine explosions.

The last chapter, ‘the outcome’ is a good summary of the effects of the battle. Scheer declared a victory on return to port (it really wasn’t) and the first Admiralty announcement seemed to the British public much like a defeat, soon mitigated by Jellicoe’s despatch. Much has been made of the fact that the Grand Fleet was ready for battle a few days after returning to port while the High Seas was supposedly immobile for the rest if the war but this was not so. Scheer reported to the Kaiser that the fleet would be fully ready for action by August and Sunderland was bombarded in that month. In 1917 it was active in Baltic operations and was instrumental in liberating Finland from the Bolsheviks. The last major sortie was in April 1918 and was on the scale of the 1916 Skagerrak operation but the British were unaware of it. However, for the rest of the war
Germany’s main hope was submarine warfare which was very nearly successful in 1917, while the Allies concentrated on mining the North Sea. The culmination of the naval conflict was the surrender of the High Seas fleet and its internment in Scapa Flow and eventual scuttling.

Many years ago, probably when I first learned of the Battle of Jutland, I said to my father that it was unfortunate that poor visibility had robbed Jellicoe of his victory. He said that no, it was a very good thing – that if the weather had been clear many thousands more of British and German sailors would have died horrible deaths and, whatever the outcome, the end result would have been the same. He was right.