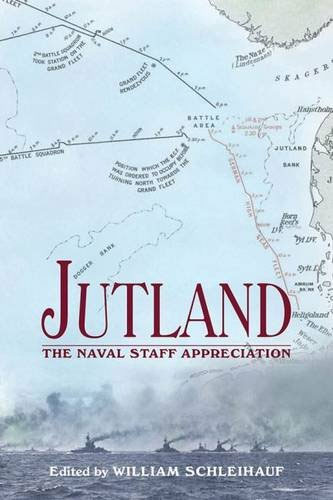 With the 100th anniversary of the battle of Jutland approaching, our distinguished late member William (Bill) Schliehauf decided it was time to re-examine the very controversial Naval Staff Appreciation of that great clash of the dreadnoughts that had occurred on May 31st – June 1st  1916.   Unfortunately he was not able to see the project to completion as he was stricken by a very serious illness in 2008 and died in 2009. The project was then taken up by his friend and colleague Stephen McLaughlin and the book was published in 2016.

The Naval Staff Appreciation of Jutland was actually the second analysis of the battle prepared for the Admiralty in the immediate post-war period. In early 1919, the First Sea Lord, Admiral Sir Rosslyn Wemyss, had ordered Captain J. E. T. Harper to prepare a Record showing what had actually occurred. It was to be based solely on the reports of the flag officers and commanding officers held at the Admiralty. Harper, a navigation specialist, had the wreck of the battlecruiser Invincible accurately located. That ship had exploded at 6.32 pm on May 31st. From this datum, working backwards and forwards in time, he was able to reconstruct more accurately the position and movement of all the ships involved. (All had been navigating by dead reckoning since leaving their bases and their assumed positions varied quite widely). Harper was finished by October 1919 and his Record was about to be published when it was decided to wait until November 1st when the next First Sea Lord, Admiral Earl Beatty, took up his appointment. Beatty demanded changes in several sections dealing with the battlecruisers which he had commanded. Harper objected and when the publishers of the Committee of Imperial Defence’s Official History Naval Operations intervened for legal reasons, the Record was shelved. It was not finally published until 1927.

Meanwhile, in November 1920 the Naval Staff College had directed Captain Alfred C. Dewar and his brother Kenneth G. Dewar to prepare an appreciation of the battle. Already in the aftermath of Jutland two schools of thought had emerged within the Service: one which held that Admiral Jellicoe, Commander-in-Chief of the Grand Fleet, had been too cautious and another that thought that the then Vice-Admiral Beatty had been too rash. It should be stated that neither of these distinguished Admirals, both of whom had been Commander in Chief of the Grand Fleet and subsequently First Sea Lord, ever engaged personally in the controversy, but their protagonists kept it up through the 1920s and 30s and even after World War II and many books and articles were written on the subject including one, The Truth about Jutland, (pro-Jellicoe) by Harper himself.

The Dewar brothers took quite a different tack. They used Harper’s diagrams but while the Record was confined to facts, the Dewars’ Appreciation discussed not only the decisions and actions taken during the battle by Jellicoe and other flag officers but the standing orders issued to the Fleet by the Commander-in Chief. This was within their mandate but a very distinct anti-Jellicoe and pro-Beatty tone is apparent rather than impartial assessment. The Appreciation was complete in January 1922 and 100 copies were ordered to be printed, but influential authorities quickly counselled that it should not be published. These included Sir Julian Corbett who had authored Imperial Defence Committee’s Naval Operations and Beatty himself while Admirals Chatfield and Keyes who were Beatty supporters warned that if issued to the fleet “it would rend the Service to its foundations”. The Admiralty then ordered all copies to be returned and destroyed (it is not clear how many had actually been issued) but four survived and that has allowed Schliehauf and McLaughlin to produce their appreciation of the Appreciation. The surviving copies that were discovered by Bill Scliehauf were: one at the National Maritme Museum, Greenwich, in the Beatty Papers; two at the British Library, London, one each in the Keyes and Jellicoe paper, and one at the Churchill Archives Centre, Cambridge. In addition, a microfilm of the first mentioned copy is held at the University of California, Irvine.

In the volume under review, the editors in their own introduction (written by Schliehauf) first explain the sequence of events described above, along with necessary notes describing how positions and courses were expressed in 1916 and how orders were promulgated by signal. Then the Dewars’ Appreciation is reproduced in full, complete with diagrams, footnotes and appendices. This part is not a facsimile of the original: the pages have been adjusted to the book’s format but the content is unchanged. The editors have in several places added their own notes and comments. These can readily be distinguished from the original authors’ notes. The diagrams have been redrawn by John Jordan (like Stephen McLaughlin a very well-known nautical historian) but apart from one very minor correction they are the same as those produced for Harper and used by the Dewars. This fascinating narrative forms the bulk of the present volume: 242 out of 316 pages.

The Dewars’ account of the battle is very clear and indeed dramatic. Starting with the situation in 1916 and the preliminary activities of both sides from May 28 to May 30, it describes the movements of the fleets from their bases to the moment of contact and then details the manoeuvres of the ships in action and all those in the vicinity. From the first contact the account is divided into discrete time blocs, some only a matter of minutes. Each is illustrated by track charts and the reader can follow the action closely, knowing who was firing at whom and what hits were obtained. This applies not only to the account of the battlecruiser actions and the two encounters of the main battle fleets but, as far as possible, to the confusing night actions in the early hours of June 1st. The Dewars apparently did not have access to German accounts which resulted in some errors.

Following the reproduction of the Naval Staff Appreciation is the Editors’ Afterword, written principally by Stephen McLaughlin but following Schliehauf’s intentions. It plainly shows that the Dewars were very critical of Jellicoe while repeatedly praising Beatty. Some of the policies they disliked were true enough but whether they were wrong is a matter of opinion. For instance, Jellicoe expected to win the battle by the overwhelming gunfire of his battlefleet in line ahead formation. He wanted the battlecruisers and cruisers to engage their opposite numbers and the chief duty assigned to the destroyers was to prevent any attack on the battlefleet by their German equivalents. Attacks by destroyers on the enemy battlefleet would only be sanctioned if the prime task was accomplished and a favourable opportunity occurred. The Germans saw what they still called torpedobootes as primarily offensive but their attacks on the British line were made by few boats and were ineffective. Jellicoe was under a misapprehension regarding the German torpedobootes. He thought they could all carry mines and that if the German fleet turned away they would lay mines in their wake and lure the British over them. He expressed this view to the Admiralty which did not demur. This was faulty intelligence: no German torpedoboote could lay mines. Then there is the matter of the deployment of the battlefleet: the Dewars did not like a line ahead contest on parallel tracks, claiming that in the days of sail it had always been inconclusive. (Stephen McLaughlin has addressed the whole question of deployment, including alternatives to what Jellicoe actually did, in his article ‘Equal Speed Charlie London – Jellicoe’s deployment at Jutland’ in the annual Warship 2010). The Dewars were also critical of decisions made (or not made) by some squadron commanders and the Admiralty Intelligence Section, the latter for not passing on some vital information.

It is appropriate on this hundredth anniversary to remember Jutland and in republishing this controversial volume with their commentaries the editors have allowed us to take a impartial view of the great drama that unfolded in the mists of the North Sea century ago when more than 8500 British and German sailors lost their lives in the space of ten hours. At the entrance to an excellent temporary exhibition in the Royal Navy’s complex of museums in Portsmouth Dockyard is the slogan: “Jutland: the battle that won the war”. That is not so – rather it was the battle that did not lose the war. It was said that Jellicoe was the only man on either side who could have lost the war in an afternoon – and he didn’t!