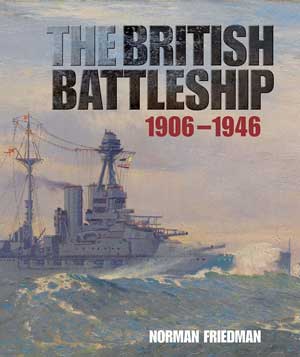 No navy has had so much written about it as the British Royal Navy. Every aspect: materiel, policy, strategy and performance in action has been described, dissected and analysed by many qualified and unqualified commentators. This is not surprising considering its long period of world dominance and its innovations in warship design that most other navies followed. Of all ship types, British battleships have received the most attention – again not surprising as they were the embodiment of naval power until they were supplanted by the aircraft carrier during World War Two.  Numerous books have been written on this particular subject. Among the best, Oscar Parkes’ British Battleships 1860-1950 (published in 1966) is rightly considered definitive while David K. Brown has used his expertise as a senior naval constructor to evaluate the different designs from the naval architect’s point of view. There have been books on battleships of the world, battleships of the opposing sides in World Wars One and Two and books about specific classes. .And then there is Norman Friedman who is unique.

On the back cover of The British Battleship 1906-1946 is the following comment: “Norman Friedman has the ability to bring new ideas to even the most widely studied subjects and a talent for explaining technology in the wider context of politics, economics and strategy……. Replete with original insights, the story that emerges will enlighten and surprise even the most knowledgeable.”  I completely agree with this assessment. His opinion on the loss of the three battlecruisers at Jutland from what he calls ‘suicidal’ ammunition handling policies should be noted. Friedman’s approach to the subject was initially launched by visits in 1973 to the Draught Room at the National Maritime Museum at Greenwich and the Public Records Office at Kew. He realised that back in the United States in the U. S. National Archives similar material must be available on the U. S. Navy. From 1973 to 1984 he was at the Hudson Institute as Director for National Security Affairs. During this time he started writing his meticulous technical descriptions of American warships as well as books on other military subjects (he has published over thirty). When it came time to re-focus his attention on the Royal Navy the Draught Room had been closed but the material had been transferred elsewhere, notably to the “Brass Foundry” (its former use) which contains what he describes as a treasure trove of information. He enjoyed full cooperation from museum staff and from British historians.

Friedman’s primary source of information has been the “covers” which contain all the correspondence proposals and preliminary designs of each class and ship. From this information one can see what the Admiralty wanted and how the designers and constructors tried to meet these demands. There was much give and take as practical solutions were worked out, ending in the final design. This was augmented by every other source of official information he could find. The result is an examination of the whole process that is perhaps too detailed for some readers but has been validated by the popularity of his books on both the British and United States navies.

Prior to the publication of this book, Friedman had published two volumes on British cruisers. The time frame of The British Battleship 1906-1946, corresponds to that of the second cruiser book, British Cruisers, Two World Wars and After (published in 2010). The approach in all of them is similar.  The British Battleship 1906-1946, which of course also covers battlecruisers, starts with an excellent, quite lengthy, introduction that puts the problems facing the designers, the admiralty and the nation into perspective. The policies and influence of Admiral Jackie Fisher were certainly most influential in the early period while between the wars the various arms limitation treaties were the dominant factors. Then in 1914-1918 and 1939-1945 the practical exigencies of combat clarified the requirements and successful solutions were devised.

Once past the introduction, each chapter describes the ships class by class, starting with the King Edwards and Lord Nelsons, the immediate predecessors of the Dreadnought,. Friedman has done his best to record and illustrate the many changes that affected the ships during their active service. With the early dreadnoughts the correct positioning of masts and bridges with respect to smoke-belching funnels in coal-fired ships took some time to work out and there were frequent changes to the siting of fire control positions and searchlights. Between the wars and during World War Two, many ships underwent major rebuilds that totally changed their appearance. There was continuous augmentation of anti-aircraft armament along with the removal of aircraft and catapults as reliance was placed on the new aircraft carriers. These changes to every class are illustrated by numerous excellent photographs; in many cases photos of the same ship at different dates. The illustrations, in fact, are the most striking feature of the book. Some are spread across two pages and are arresting in their detail although in some cases, depending on their position in the book, the middle of the ship appears to disappear into the binding. (The same technique was used in the two cruiser books). In the middle of this volume there is a section of reproductions of Admiralty “as fitted” draughts showing the profiles of thirteen different ships, some in fold-out format for even greater detail.

This is a technical, not an operational history. Friedman does not (like, for instance, R. A. Burt) describe the stations, assignments and actions of each vessel except where lessons learnt resulted in changes in the ship involved or to subsequent designs.  But for a meticulous description of every capital ship of the Royal Navy from Dreadnought to Vanguard, not only as built but throughout their lives, The British Battleship 1906-1946 cannot be beat.