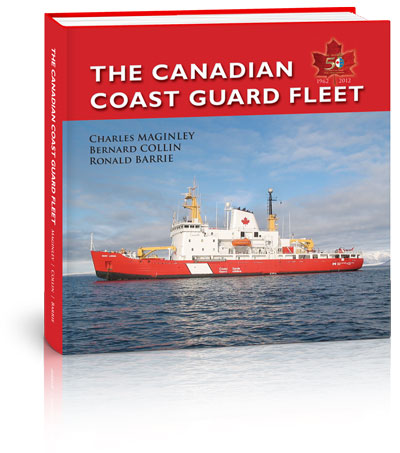 Created in 1962 as a successor to the civilian Canadian Government Fleets that had existed since Confederation, the Coast Guard has included a wide variety of ships and smaller craft from large icebreakers to small patrol vessels and rescue lifeboats as well as hovercraft and helicopters.

All are described and illustrated in this volume.

This new book updates The Ships of Canada’s Marine Services, describing the fleet from the official creation of the Canadian Coast Guard in 1962 through its first 50 years. Smaller vessels not covered by the previous volume are fully described here.

The authors, Charles Maginley, Bernard Collin and Ronald Barrie, have all served in the Coast Guard and have contributed to other books about Canada’s nautical heritage.

Read reviews of this book.

See shipping charges. Please contact us for prices and shipping on quantities of more than 5 books, or for shipping to locations outside Canada and the US.