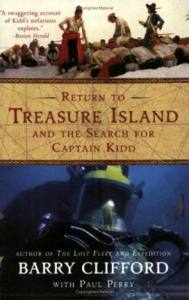 The book tells two stories. One is about undersea explorer Barry Clifford’s expeditions to Ile Sante-Marie off the eastern coast of Madagascar searching for the remains of Captain William Kidd’s ship, the Adventure Galley (Clifford was backed by TV’s Discovery Channel).. The other is an account of the true history of Kidd, and especially of his last and fateful voyage. These two tales are related in parallel: the narration keeps switching back and forth, rather as it is often done in television programs on historical subjects of this nature. This technique is actually effective: when the reader gets tired of the problems of the dive team, caught between their TV backers’ demands for results within a given time frame and the delays of Malagasy bureaucracy, we are over to Kidd and his machinations and problems, which were equally frustrating.

This is the best and most complete account of Kidd and his history that I have seen. Kidd’s early career was quite successful. After serving in the Royal Navy, he became privateer captain licensed to rob the enemy’s ships – in this case the French. With a considerable fortune, he settled in New York and married a wealthy widow. New York in 1691 was a rough frontier type town and as long as money was to be made, its merchants and government officials readily dealt with privateers and pirates alike. The Kidds lived in a large house his wife had inherited and they had two daughters. Kidd conducted a business, owning wharves and ships. By any normal standards he was a success.

At that time the Indian Ocean was infested with pirates. The Great Mogul complained bitterly to William III. but the King had no ships to spare. In 1695 a scheme was hatched to send a private ship to attack the French and the pirates in the Indian Ocean and profit from the loot captured from both. A principal backer was Lord Bellomont who had just been appointed Governor of New England and King William himself was one of the investors. Now who better to head the expedition than successful privateer William Kidd? An offer was made and Kidd could not resist. The syndicate had a new ship built for Kidd. The Adventure Galley resembled a small warship of the period and was the perfect vessel for the job.

Kidd had been instructed to bring all the captured treasures back to New York or Boston when it would be divided with the backers getting the lion’s share. This was quite unacceptable to Kidd’s crew of mostly former pirates who were accustomed to a division of spoils on the spot. Furthermore, he could not find anything he could legally capture – the crew wanted to attack any ship including those of the East India Company, but Kidd refused. Eventually he captured a rich Turkish ship called the Queddah Merchant. She had an English captain but had a laissez-passer issued by the French which he took as an excuse to seize her. Then, with the Adventure Galley leaking and in need of repair, he sailed for the pirate hangout of Ile Ste-Marie, the Queddah Merchant with a prize crew following several days behind. These pirates were the very people he had been sent to attack but he now had no way to do so. The crew deserted and stripped the vessel. After the Queddah Merchant arrived, Kidd managed to get together enough loyal crew members to sail in her for Hispaniola. The Adventure Galley was burned.

The dive team arrived in Madagascar in early 2000. They found they had permits to search for the wreck but not take anything from it. As this was a reconnaissance mission they were not worried, but on a second trip in May, when they expected to get to work, permission was still withheld. It subsequently appeared that, while they had the backing of some Malagasy government ministers, another underwater archaeologist, who suspected them of wanting to trespass on his own project, had the ear of the ambassador in Washington and of other government members. Nevertheless, they were able to take some coins and pottery shards from the first wreck they found – actually just a pile of ballast stones – and photograph them before returning them to the site. Experts in France dated the coins to a period twenty years after Kidd’s expedition. It was not the Adventure Galley..

To return to Kidd: on arrival in Hispaniola, he made arrangements to sell some of the Queddah Merchant’s cargo – valuable bales of silk and cotton. With more of the cargo transferred to a smaller vessel, he made his way back towards New York. At Gardiner’s Island off the eastern tip of Long Island he buried some treasure, later excavated. This is known but those who still think that Kidd may have had something to do with Nova Scotia’s Oak Island should give up that idea. He would never have had the time to reach there, much less install elaborate tunnels. Anyway, Kidd, joined by his family went to Boston to confront Lord Bellomont. There was some bargaining with Kidd promising to go back to Hispaniola and return with great riches, but instead he was jailed and sent to England where, after an elaborate trial, he was hanged.

Although I have not seen it, the television program of Clifford’s expedition was completed. They found what must have been the ballast of the Adventure Galley but there were no artifacts. The first wreck was identified as a much more important ship, the Fiery Dragon (wonderful name!) that had belonged to “One Hand Billy” Condon, a real “pirates pirate” who roamed the Indian Ocean twenty years after Kidd’s time. The Dragon had burned by accident at Ile Ste-Marie in 1720 but Condon had made himself and his crew rich. He retired to St.Malo in France where he was regarded as a merchant of the utmost probity and honesty! We have not heard much about him in pirate lore because most of his activities were in the Indian Ocean. Kidd is more famous and this book gives a good account of him, while the TV program should be worth seeing.