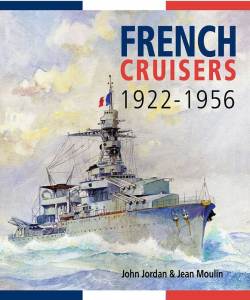 This impressive book by John Jordon and Jean Moulin provides a detailed technical description of all the cruisers of the Marine National that were built between the two world wars together with a brief account of their operational history. The authors’ task was to describe fifteen ships divided into   four classes, plus four individual “one-off” units for a total of nineteen (or twenty counting the De Grasse which was not completed until after the war). The subject has been addressed in naval publications – in the annual publication Warship by John Jordon, one of the authors, and by Jean Guiglini and Albert Moreau (translated by Ken Macpherson) in the quarterly Warship International. However, the volume under review puts it all together in a comprehensive format very well illustrated with photographs and plans.

A long introduction deals with the French Navy’s general policies regarding matters common to all classes: layout, command spaces, armament, protection, machinery and aircraft as well as a review of the dockyards and building facilities.  This is followed by two parts: Part I is the technical section that describes the details of all ships while Part II is the historical section that recounts the service of all the ships in peace and war.

The subsequent chapters deal with each class in turn.  Chapter 1 describes the three-ship Duguay-Truin class. This is the first book that I know about that shows how the Marine National, with these ships, defined the design of the inter-war cruiser and all others up to the end of the gun armed cruiser era. Credit is usually given to the Washington Treaty, but that merely established maximum size and gun caliber. The Duguay-Trouin’s were on the drawing boards before 1922. They owed nothing to development as France had not laid down a cruiser of any kind since 1906 and that was a large armoured cruiser of a type obsolete by 1919. Nor is there any sign of foreign influence: British and German WW 1 light cruisers had individual gun mounts and speeds of less than 30 kts., while the planned American and Japanese designs were eccentric to say the least and did not develop further; but the 8000 tonners, as they were called, had a powerful main armament of eight 155 mm (6.1”) guns in twin gun houses with mounts 2 and 3 super-firing. They developed 102,000 SHP giving a designed speed of 34 kts. Even their sleek appearance denoted a new era in design.

Chapter 2 is about the Duquense and Tourville and Chapter 3 the four ships of the Suffren type, all Washington treaty cruisers of 10,000 tons with 203 mm  (8”) guns.  Chapter 4 covers the Individual designs: the minelayer Pluton, the training cruiser Jeanne d’Arc and the Emile Bertin which was intended to lead squadrons of the big contre-torpilleurs.  Algerie, the last of the seven Washington Treaty cruisers, gets a chapter by itself.  She illustrated a trend to increased protection at the expense of some loss of speed. Chapter 6 is devoted to the six ships of the La Galissoniere class that conformed to the 1930 London Treaty’s 132 mm (6”) main armament limit. These were considered successful ships.  All of these chapters are illustrated with excellent photographs and clear profiles, plans and cross sections of the ships, not only as they were built but at all stages of their career. Guns and mounts and the aircraft carried are also shown. Chapter 8 is about the De Grasse. She was laid down at Lorient just before the war. Under German occupation, in spite of Allied bombing, some reluctant progress was made and at the end of the war a bare hull was available.  She was completed in 1956 as an anti-aircraft cruiser. Her conversion ten years later to the command ship for the French nuclear tests in the Pacific is discussed in a later chapter, as is her near sister Colbert, laid down in 1953 and completed in 1959.  (I would have liked more complete coverage of the Colbert to complete the record). The final chapter of Part I concerns pre-war designs that never materialized.

Part II, the historical section, is divided into four periods:  1926 to 1939, the pre-war period; 1939 to 1943 when the surviving ships rejoined the Allies; the later war period 1943 to 1945 and post 1945 operations in Indo-China.  Photographs showing changes to the ships after 1939 and maps illustrating the various actions are provided. This is a rather tragic account.  It is not often appreciated that in World War Two the French Navy had to fight more enemies than any other: first the Germans and the Italians, then the British, the Americans and  General de Gaulle’s Free French; then in the Far East the navy of Thailand and after 1943 the Germans again and the Japanese. Even so, a significant though much battered and worn out force survived.  Of the original nineteen cruisers, the minelayer Pluton was lost by the explosion of its own mines, two were destroyed by American action and seven were scuttled at Toulon to prevent seizure by the Germans, leaving nine at the war’s end.

In the centre of the book there is an eight page colour section reproducing paintings by marine artist Jean Blade which enhances this high quality production. It should be noted that the same authors have previously issued a similar book about French battleships. If other types are covered in the future they will have provided a remarkably complete record.