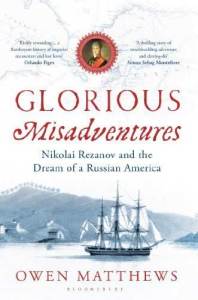 Nicolai Rezanov was a minor Russian aristocrat in the time of Catherine the Great and the Tsars Paul and Alexander I. (He was born in 1764). Like others of his class, he competed for honours and preferment at the court of St. Petersburg. He was also a man of vision and ambition for himself and for his country and he sought his fortune at the far frontiers of the Empire. He was primarily in search of wealth which he achieved: he married the daughter of Grigory Shelikov, a millionaire explorer and fur trader; but for Rezanov wealth was not enough, he wanted fame as well as fortune. His ambition was to extend the Tsars’ dominions from Alaska all the way to Northern California as well as to open relations with the then “hermit kingdom” of Japan.  He dreamed of a North Pacific dominated by Russia with trade routes stretching from Siberia, Alaska and California to Hawaii, China and Japan, taking as his model the British East India Company.

In this book, his story is told by Owen Matthews, a British journalist whose mother was Russian. In the summer of 1986, when he was sixteen, Owen visited an aunt in Moscow and was taken to see the hit musical Junona i Avos. It was the period of the warming of the cold war and the show was a rock opera with western type music and a hero who was a Tsarist aristocrat! This was when the young British student first heard of Nikolai Rezanov and his romance with Conception de Arguella, the teenaged daughter of the Spanish governor of the outpost of San Francisco.  In the nineteenth century, their romance was well known in America through stories by Bret Harte, and the novelist Gertrude Atherton but in Russia it (and Rezanov himself) had largely been forgotten until Junona i Avos achieved unexpected success. (The title is incomprehensible unless you know that it is the name of two ships).

Owen Matthews went on to become a distinguished journalist and the author of the acclaimed 2008 book Stalin’s Children and in due course set out to show that Nicolai Rezanov’s life should be remembered for more than the San Francisco episode. In doing so he has followed Rezanov’s journeys from the luxury and intrigues of the court of St. Petersburg to Irkutsk on Lake Baikal, headquarters of his father-in-law, and on to Okhotsk from which ships traded to Alaska where the Russian America Company held tenuous toeholds. The distances are enormous and travel took months, even years. Eventually Rezanov returned to St. Petersburg with a scheme to open up diplomatic relations and trade with Japan, which was resolutely avoiding all contact with foreigners except for one small Dutch trading post which had been there since the early 17th Century.

He obtained Imperial backing. An expedition was organized with two ships laden with expensive presents for the Shogun of Japan. The Nadezhda and Neva were commanded by the naval captain Krusenstern with Rezanov as the Tsar’s representative and ambassador.  It was also going to be a scientific expedition with a Dr. Langsdorf on board as a naturalist. The trouble was that both Rezanov and Krusenstern considered that they were in charge of the project. This was a recipe for disaster and Rezanov’s autocratic ways soon alienated the naval officers who made no secret of their dislike.  He consequently had a miserable time throughout the long voyage.  Worse was to come. After they arrived at Nagasaki the only way of communicating with the Japanese officials was through one of the Dutch traders and from him to a Japanese interpreter. Suffice it to say that after months of negotiations the Japanese firmly rejected all proposals but generously supplied the Russian ships and sent them on their way.

After leaving Rezanov in Kamchatka, Krusenstern took the ships back to the Baltic and arrived to much acclaim and rewards for himself and his crews. Rezanov, determined to justify himself, went back to Alaska, finding the outpost of Sitka at war with the local natives. Eventually he went south in the Company ship Juno, arriving at San Francisco in March 1806 starving and suffering from scurvy.  The Spanish nursed Rezanov and his crew back to health, with Rezanov now a widower proposing to the young Conception, usually called Conchita. In May he left, promising to return and marry her but he never made it. Exhausted and ill, he died in Krasnoyarsk on the Yenesei River on 8 March 1807.

The achievements of Krusenstern or Kruzenshtern were acknowledged  by the Soviets who named the great four masted barque Kruzenshtern for him. Matthews plainly feels that Rezanov deserves to be recognized for his vision and determination, not just as a tragic lover and has written this detailed but fascinating account.