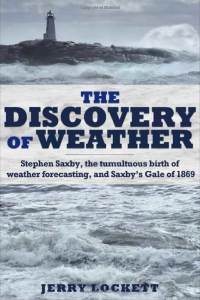 This book by Halifax meteorologist Jerry Lockett combines scientific history with graphic descriptions of catastrophic events and a warning of what may happen in the future. It is in two parts. The first tells the history of the first tentative efforts to understand how storms form and how to forecast them, while the second describes in detail the “Saxby Gale” of 1869 that did enormous damage through the eastern United States and the areas around the Bay of Fundy. In fact it had much in common with the recent Hurricane Sandy which must have hit just after the book had gone to print. The final chapter: “Why Saxby still matters,” is a third theme and well worth heeding.

It was Benjamin Franklin who first noticed, in 1743, that storms move across the earth’s surface but not necessarily in the direction the wind is blowing at the observer’s location. Then in the first half of the nineteenth century a number of researchers figured out different aspects of the puzzle. In America, William Redfield discovered that winds in a hurricane rotate around its centre while James Espy deduced that latent heat is the source of energy in a hurricane, but each totally denied the validity of the other’s theories! Then William Morse’s telegraph allowed reports to be sent to a central point; in the USA this was the Smithsonian Institution. The first weather maps were posted there in 1850, but this ceased with the Civil War as the telegraph system was needed for military purposes.

In England Admiral Robert FitzRoy (who had commanded the Beagle on Darwin’s famous voyage) became head of the Board of Trade’s Meteorological Department in 1854. He started to gather data by telegraph from a network of stations in the British Isles but it was 1861 before he issued the first storm warnings to mariners and published forecasts in the Times. Unfortunately he suffered from depression and committed suicide in 1865 at which the Board of Trade halted weather forecasts. It would be some time before they were reinstituted on both sides of the Atlantic.

And then there was Saxby. Stephen Saxby was a schoolteacher who was hired by the British Admiralty to instruct junior officers and engineers at the Chatham naval base. He was, by all accounts a good teacher, but when his interest turned to the formation of storms and weather forecasting he came up with a theory that was totally erroneous. He believed that the declination of the moon, north or south of the equator, influenced the formation of storms and hurricanes. At first his ideas received favourable comment. They sounded scientific and more likely than atmospheric disturbance by meteorites or astrology, both of which had their advocates. His theory might have been wrong but Saxby was fortunate: he seemed to have got it right on two occasions. In October 1861 he predicted a storm would hit the British Isles on November 1st and one did. Fitzroy had failed to forecast it. But his chief claim to fame would come eight years later. In 1868, one year in advance, he predicted a violent storm would occur on the following October. 5th to 7th. Now he did not say just where in the world this would occur but when a hurricane swept though New England and New Brunswick on October 5th 1879 he was credited, at least in the Maritime Provinces with extraordinary abilities and the event became known as “The Saxby Gale.”

Part Two of the book describes the Saxby Gale or hurricane in detail. The author has studied the remarkably complete accounts that have been preserved in the archives of the newspapers that were published in most towns in those days and in government records. The Saxby Gale’s effects were very much like those of 2012’s Hurricane Sandy. Enormous amounts of rainfall caused floods in all the northeastern American states. Rivers swelled, houses were swept away, railways and roads were washed out and many people lost their lives. On the coast dozens of ships were driven ashore. Similar events took place when the storm crossed into New Brunswick, but now an additional effect was to occur. It was precisely the day of the perigean spring tides when the moon and sun act together to cause the greatest tides increased even more as the moon was at its perigee – the closest it comes to the earth- and to this was added the storm surge caused by the winds on the eastern side of the hurricane blowing straight up the Bay of Fundy. The result was a high tide that overtopped the Acadian dykes all around the perimeters of the Minas Basin and Chignecto Bay. There was NO record of such an occurrence since the dykes were built about 200 years previously. The railway connecting Nova Scotia to the rest of Canada was washed away as were the telegraph lines and all roads leading across the Chignecto Isthmus.

In his last chapter Lockett describes the progress we have made in forecasting events like these but warns that the dykes, long ago rebuilt, offer no defence against a storm on the scale of Saxby’s. We also continue to build structures on flood plains and hope for the best. Personally, I like to live on a hill.Jerry Lockett. The Discovery of Weather: Stephen Saxby, the tumultuous birth of weather forecasting, and Saxby’s Gale of 1869. Halifax NS; Formac Publishing, www.formac.ca, 2012. 272 pp.,Illustrations, maps, appendices, notes, bibliography, index. $29.95, cloth; ISBN 978-1-4595-0080-8. eBook also available.