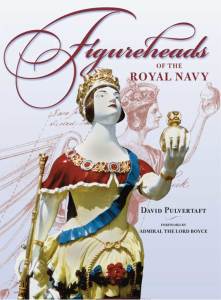 Since the early years of the seventeenth century, figureheads have been a nearly universal feature of all except the smallest sailing warships and merchant ships. That includes ships built of iron and steel: any Tall Ship built today can be expected to have a figurehead. The essential requirements are that a bowsprit must be fitted and the ship must have a raked or clipper bow or timbers that give a similar line ahead of a vertical stem. Figureheads on ships with vertical or ram bows, even with a bowsprit, never look right. In those cases a medallion or coat of arms is appropriate and a good example is the shield that used to grace the bow of the iron corvette HMS Canada that is (or used to be) on display at the Maritime Museum of British Columbia at Victoria BC.  It is the Canadian coat of arms of her day (the early 1880s).

David Pulvertaft is a Rear-Admiral R.N. who has made the most comprehensive study yet of the figureheads of ships of the Royal Navy and has collated the information in this attractive book. He has included only information that is known beyond doubt and which comes from one of the following sources. First, figureheads which still exist: remarkably about 200 of them! Secondly, those that no longer exist but were previously catalogued, described and photographed or otherwise illustrated, some while still in place on the ship. The third body of evidence is comprised of the detailed designs submitted by figurehead carvers, together with the asking price for the job, which have been preserved in the archives of the Admiralty and are now in the collection of the National Maritime Museum at Greenwich. Sometimes more than one design was proposed and annotations by officials show what was approved and fitted to the ship on completion.  The final way in which we can know what the figureheads were like is by studying the superb detailed seventeenth and eighteenth century models made when a new design was prepared for Admiralty approval. The carvings on these models are intricately detailed and, in the case of large ships like first-rates, can be very complicated. While there is no guarantee the full sized figurehead was exactly like that on the model, it would have been very close.

The early chapters deal with the ship carver’s task and with those artists, well known in their time, who achieved success and repeat orders from the Admiralty. The business and the skills were often handed down through several generations. The Hellyers of Portsmouth were a typical example: they worked both in the dockyard itself and in their own workshops. Then a chapter covers sixteenth and seventeenth century figureheads and another shows eighteenth century examples. Much of the evidence for the earlier ones comes from the models, with carvers’ submissions becoming more numerous in the later period. But the bulk of the book is devoted to the nineteenth century for which a great amount of information is available; so much so that different chapters are devoted to figureheads of royalty, famous people, beasts, birds, mythology and several other categories. The last Royal Navy ship afloat and in commission to bear a figurehead was the steel sloop HMS Espeigle, launched in 1900 and not sold until 1923.

The illustrations are, of course, the heart of the book and its raison d’être. There is a colour section showing preserved figureheads among which I discovered an old friend:  the image of Admiral Nelson from my training ship Conway, ex HMS Nile, launched in 1839. This is a replacement, in fact a second replacement, carved in 1938. Figureheads are carved from wood and, if exposed to the elements must, in time, rot. But when a ship was broken up at the end of its life, the figurehead, if in good condition, was usually removed and many were thus saved, at least for a time. Those housed indoors in museums or at naval establishments will, if maintained, last for a very long time. An example of this is the figurehead of HMS Imaum, a76 gun ship built at Bombay and launched in 1826, which is on display at the Maritime Museum of the Atlantic in Halifax.

The last section of the book is the figurehead directory, listing existing figureheads and models with their present location as well as those that have been recorded but since destroyed. The designs submitted by carvers, with museum or archival reference numbers, are all listed. In many cases the entries show the sequence of figurehead proposals and those actually made, including replacements. This book will undoubtedly become the standard reference for anyone who in the future may be needing information on Royal Navy figureheads. It is also an attractive addition to anyone’s naval bookshelf.