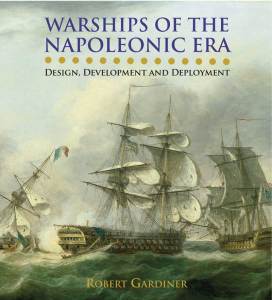 Warships of the Napoleonic Era by Robert Gardiner

It would seem that a great many books on the age of fighting sail have been published during the last two decades. Lavery, Winfield and others may be thought to have covered the subject, but now we have this large and beautifully illustrated volume which can be considered as complementary to the books by those authors.

The book was actually first published in 1999 and this is a new and improved edition. For the author Robert Gardiner, as he says in the foreword, the essence of the book is provided by the draughts reproduced from the comprehensive collection of original ship plans, held at the National Maritime Museum at Greenwich. Many of these even have alterations to the design as built and later repairs noted in different coloured inks. But to the reader the greatest impact is likely to be the magnificent illustrations: reproductions of paintings and photographs of period models that are shown at their best in the large format of this lavish volume.

The chapters on the different types and rates of ship include explanations of their evolution during the period, comments on their good and poor qualities as seen by contemporaries, and remarks on their employment and how it changed during the period of the Revolutionary and Napoleonic wars. Ships of the line are described starting with first rates and working down. Their rates (first, second and third) had been established in the 17th century and, except for a gradual increase in size, had changed little. Then frigates (fifth and sixth rates) are dealt with going the other way, from small to large. There is a reason for this. The frigate originated in the late 1750s, replacing older designs in the lower rates, and their evolution is described as they grew larger and got heavier armaments. 50 gun ships are included with the ships of the line and 20-24 gun post ships with the frigates.

Further chapters describe sloops of war and the smaller craft: gunboats, cutters and so on and ships built on the Great Lakes. It should be noted that wooden warships could last for a long time and many that served in the period covered by this book had been designed and built in earlier decades. As is well known, Victory was 40 years old at Trafalgar and was still considered one of the best first rates.

All of these chapters – the bulk of the book – deal with ships built for the Royal Navy but the Admiralty took care to survey and fully record captured ships, providing data for chapters on the designs of French, Spanish, Dutch, Danish, American and other warships, including explanations of the different design philosophies of those nations, whether based on strategic policies or geographical constraints such as, in the case of the Netherlands, shallow coastal waters.

Throughout the text there are interesting discussions regarding the employment of the various rates and classes as influenced by their characteristics. The first rates of 100-110 guns were limited in number and were the flagships on the Home and Mediterranean stations. The second rate three-deckers of 90-98 guns were secondary flagships. Although they were seldom good sailers they were favoured by Britain as they provided concentrated firepower, but France and Spain preferred large two decked 80s. The Royal Navy did build a few third rate 80s and captured others and with the “large class” of 74s they were often used when fast detached squadrons were required. The “common class” 74s were the most numerous, general purpose battleships. The 64s were meant for the North Sea and, along with the 50s, could provide some force on distant stations but a few were sometimes to be found in the main fleets. The frigates were scouts for the battle fleet, convoy escorts and commerce raiders. From 28 gun sixth rates with 12 pdrs they grew in response to French developments to 18 pdr fifth rates of 32-38 guns and even a few with 24 pdrs. Then, in the war of 1812, a number of losses to the big American frigates of the Constitution class caused the construction of a number of very big 24 pdr frigates and the conversion of 74s by removing a deck. These never had a chance to prove themselves. Sloops and smaller craft were needed for a variety of subsidiary tasks.

Warships of the Napoleonic Era is a very attractive book as well as being absolutely sound in its descriptions and conclusions. The only problem; It’s so big, where do you keep it?

This review was first published in ———