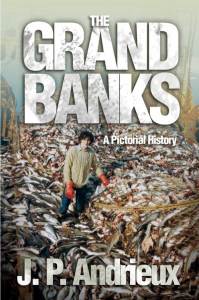 This is not an account of Canadian or American fishing on the Grand Banks but of the enterprise of the fishermen of many countries that crossed the oceans to fish in the once teeming waters of our continental shelf. The first voyagers came from Western Europe: France, Spain and Portugal; and later from the Baltic, the Mediterranean, the Black Sea, the Caribbean and even from the far Pacific. It is a pictorial history and the pictures are outstandingly comprehensive. There are photographs from the early twentieth century to the present day: pictures of the ships of all the nations involved, of captains and crews and of workers ashore in fish plants. There are pictures of newsworthy events – strikes, protests, rescues and disasters as well as essential maps showing fishing zones and claims.

But the story is not only told in pictures: the book starts with a concise survey of the early days of the fishery from 1500 (and quite possibly earlier) to the First World War. Here, and later in the book, we learn much about the chequered history of the French islands of St. Pierre and Miquelon, where Mr. Andrieux, the author, has his family roots. St. Pierre schooners like their Newfoundland counterparts, fished using dories but larger vessels came from France and landed their catch to be dried and processed on the islands. At the turn of the 19th and 20th centuries, steamers brought several thousand workers from metropolitan France to the islands to do this work. It was a seasonal endeavour: they would come each spring and return to France before winter set in.  Gradually, the fishing declined and so did the prosperity of the islands. Then came a reprieve: from 1919 to 1933, during the period of “Prohibition” in the USA. St. Pierre and Miquelon became the depot for smugglers taking liquor to alcohol-craving Americans. With the repeal of the Volstead Act hard times returned and many island people emigrated, some to France and some to Newfoundland or Canada.

Between the wars, fleets of fishing vessels came annually from Spain and Portugal as well as from France. The Portuguese had been doing this for 500 years and the others nearly as long. Italian trawlers also were seen, but the demand for salted cod was so great that Newfoundland and Canadian-caught fish continued to be exported to all southern European countries. The Grand Banks were international waters and anyone could fish in a totally unregulated way. What managed to conserve the stocks of fish to some extent was that fishing ceased during the winter and the worst of the spring ice season, but each annual expedition of the fleets was spoken of as a “campaign”. They made war on the cod and, in the end, they won and the cod have been virtually wiped out. From 1914 to 1918 and 1939 to 1945, humans turned to fighting each other and the cod recovered. Then, after 1945, new participants joined in and the assault was resumed in overwhelming force. When fishing was with hand lines from dories and sailing vessels, the fishery was sustainable. Then came the steam trawler, first introduced on the Banks in 1905. Finally, after the Second World War, the stern trawler transferring its catch to factory ships and the freezer trawler that processed the fish on board (all capable of fishing in winter as well as summer) proved to be weapons that nature was unable to withstand.

Mr. Andrieux follows the development of the European national fleets between the wars and the great expansion and technical advances of the post war era. For a decade after 1945 catches were good and the fish were large. Then came decline caused largely be new participants with new ships and equipment. Until the 1950s, Russia had not engaged in transatlantic fishing, but from then on a huge, highly organized effort created a fleet larger than that of any other nation, including trawlers, factory ships, tugs, supply ships and tankers. It was like a naval task force and the Americans were convinced their real purpose was spying and commissioned two fake trawlers to cruise among them to detect this, with what success will never be known. Other Baltic nations like Poland and East Germany as well as Bulgaria, Japan and South Korea sent ships to the area.

Besides the describing the actual fishing activity, international agreements, disputes, multilateral and bilateral diplomatic negotiations and unilateral measures are discussed. The extension of the territorial sea from three to twelve miles in 1970 and the declaration by Canada of a 200 mile exclusive economic zone in 1977 were key events.  After the latter, the huge European fleets mostly disappeared. A few vessels remain: the Spanish are still there and trawlers under unlikely flags of convenience harvest the nose and tail of the Bank, just outside the 200 mile limit, for previously disregarded species like turbot. As well as the text, the wonderful photos bring us right up to date. If you want to know what happened to the fish on the Grand Banks, never mind the scientific studies and government reports: just read this book.