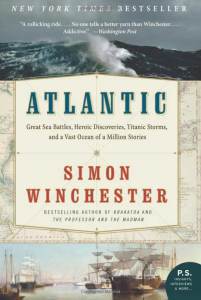 This is a remarkable yet infuriating book: magnificent in concept, yet full of mostly avoidable minor errors, many of which especially offend the seaman’s ear. The author has published very significant books in the past (Krakatoa, The Professor and the Madman and The Man who Loved China) and has a gift for revealing little known facts and surprising associations. He also seems to have been almost everywhere – especially to the most remote and isolated parts of the world. He has survived dangers and had many adventures: just escaping from the East Greenland icecap as winter sets in, an Argentine prison, accused of being a spy, during the Falklands War, reaching South Africa in a small yacht; and of his erudition there can be no doubt. Influenced by all this he has undertaken to tell us the story of the Atlantic Ocean: its influence on humanity and humanity’s influence on it.

He has structured his story using Shakespeare’s lines from As You Like It about the seven ages of man and he has described the Atlantic from its infancy through to its eventual dotage. First, in a preface, he describes how the ocean was formed as the proto-continent Pangea split apart. Then we have the seven ages. Infancy: how humanity first discovered and started to exploit it. Schoolboy: how we learned about it (the oceanographic sciences).  Lover: the Atlantic in poetry and culture. Soldier: Wars, colonisation and the slave trade. Justice: trade, treaties and maritime law. Pantaloon: decline of fish stocks, pollution. Senility: global warming and climate change. Epilogue: the Atlantic disappears as a new supercontinent is formed; but we will probably not be around.

The book really is a delight. There are unexpected revelations at every turn and I particularly like the footnotes which tell you stuff you only realise you ought to know when you come across them; but even some of these have errors: the work seems to have been rushed to publication.  The illustrations are interesting and survive the less than prime paper quality. The end papers are evocative: one shows the Leviathan, Majestic and Berengaria together, taken in New York in the early to mid 1920s. These ex German liners were the largest in the world at that time. The other is a WWII convoy photo.

Atlantic is an important work in spite of its faults which are, one must concede, superficial. And none but a mariner would detect half of them.

Also available as an audiobook (links below left).