John Ward and Kenneth Shoesmith were marine artists who lived nearly a century apart and who illustrated very different types of ship, yet they had much in common. Both came from comparatively humble origins, both were successful and both died very suddenly at around the age of 50 when they had become respected members of their profession and were at the height of their powers. Their work is important to us today in showing us what ships and the nautical world was like in the past. In the case of Ward that was the early part of the nineteenth century, while a similar time period, ninety years later, is evoked by Shoesmith’s work. 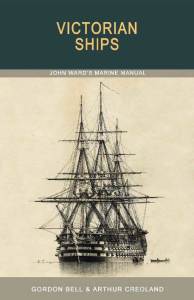 John Ward (1798-1849) was the son of a shipmaster of Hull in Yorkshire. While that may not seem very humble, in the early 1800s a coastal or short-sea skipper did not rate very highly on the social scale outside his home town. At about the age of 13 John was apprenticed to a ship and house painter and started by literally painting ships’ timbers using a bucket of paint and a mop; yet by the age of thirty-three he had exhibited important oil paintings at the Royal Academy in London. Nevertheless, he remained firmly based in his home town of Hull. After completing his apprenticeship in 1819, he set up on his own and always advertised his business as painting ships, houses and signs. At the same time he started painting marine scenes in oils and in the then new technique of watercolour. Hull shipowners, who needed canvasses depicting their ships, provided a ready market and before long Ward concentrated on artistic work, leaving his employees to paint the ships and houses.

Although not a seaman himself he must have spent time in his father’s ships and he was certainly a meticulous observer of a ship’s construction and rigging and how it behaved in various conditions of wind and sea; hence, his depictions are of the utmost accuracy and are invaluable in showing what ships were like in the era before photography. He set out to show every type of ship, large and small, sailing ships and early paddle steamers, that used the port of Hull. At a date not recorded he must have spent time at or near Portsmouth to record every class of naval ship from first-rate to revenue cutter. In the 1840s he became very interested in lithography (also a recent invention) which allowed an artist to produce multiple copies of a single work at an economical price. He was preparing a volume of prints intended to help budding marine artists when he very suddenly died of cholera during an epidemic in 1849 at age 51.

The book traces his life, shows works of the artists that influenced him and some of his own paintings. It is in rather small format, black and white, but is intended as a guide to those who want to see more of John Ward’s work, especially those held at the Hull Maritime Museum.

It reproduces the prints that were intended to be in the Marine Manual he was preparing at the time of his death. This would have included several studies of HMS Britannia,120, the Channel Squadron flagship, seen under way from different angles and at anchor, besides a comprehensive selection of other warships and British merchant vessels.

Kenneth Shoesmith (1890-1939) was born in Halifax, West Yorkshire to what his biographer Glyn L. Evans diplomatically calls a single parent family as no father is recorded on his birth certificate. His grandmother and mother kept a boarding house at Blackpool; nevertheless he received his initial training on the well known school ship HMS Conway, a relatively prestigious start to a sea career. He had taken drawing lessons as a boy and continued to sketch and paint in watercolours while on the Conway and after he joined the Royal Mail Steam Packet Company as a cadet in 1908. By 1918 he was Chief Officer of SS Cardiganshire but as soon as the war ended he resigned in order to pursue a full time painting career. The Royal Mail company was glad to have his services and commissioned him to produce posters (he always defined himself as a poster artist) and many of his paintings were made into advertising postcards and calendars which in no way detracts from their artistic merit.  He also got commissions from other companies and from government departments. In 1916 he had married Sarah Richie, the daughter of a wealthy Belfast shipowner and they lived comfortably in London. His success as an artist was confirmed by a commission to paint the murals in the dining room of the Queen Mary which can be seen if you visit the ship in Long Beach CA where she is preserved. 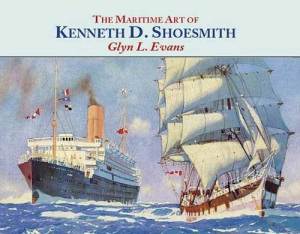 By the 1970s Shoesmith had largely been forgotten and when the Executors for Mrs. Sarah Shoesmith contacted the Ulster Museum in Belfast in 1975 to notify them of a bequest, a group of astounded experts, none of whom had ever heard of him, were able to view a large collection of paintings, sketchbooks and graphic materials of all kinds. Two years later the museum devoted its largest gallery to a major Shoesmith exhibition (and will have another in December 2011). Glyn Evans, the author, a marine insurance underwriter, became fascinated with Shoesmith and devoted many years to researching his work. Over time, people would come across a painting, note the artist, investigate on the net and be led to Glyn Evans who has finally compiled this most attractive volume. In contrast to the booklet on Ward’s work, it is a riot of colour: white cruise liners in exotic ports, passengers crowded around a swimming pool, night scenes in moonlight with portholes glowing, impressionistic paintings of freighters (you can almost hear the rattle of the winches) and eastern longshoremen swinging cargo nets of cases into the hold. Mr and Mrs Shoesmith were often invited by the Royal Mail Line to go on cruises in such ships as the Atlantis and Alcantara to gather material for posters for the Company.

On 6 April 1939 Kenneth Shoesmith died suddenly after suffering a stroke. He was just 48. Of him Glyn Evans writes: “… he was definitely in the front rank of those who are content to paint what they see and know. He was direct in his methods, sound in his drawing and brilliant in his colour….. for he painted with a seaman’s knowledge as well as an artists perception”. This most attractive book is fitting memorial to someone who depicted ships in a way that some of us remember them, while the book on John Ward opens a window to an earlier period. Both are well worth having.