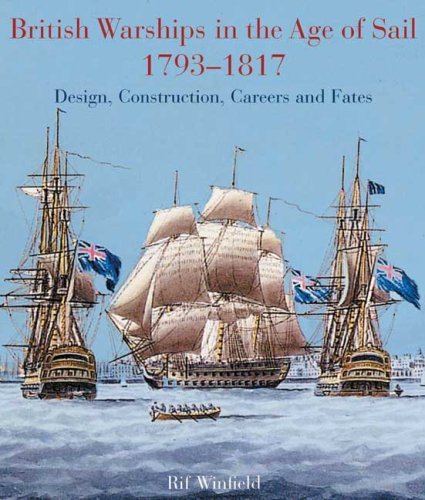 In the last two decades, the British Navy has become quite a growth industry for academics, researchers, military analysts, ship enthusiasts and writers of stirring salt-water fiction. The Royal Navy may nowadays be in the second class as far as relative sea power is concerned but books about its influence on world history, its organizational and social structure and its ships and equipment seem to appear every few months. This book is about the Navy’s ships during the heyday of fighting sail and is a worthy companion to other well illustrated, large format books on the same general subject by Lavery, Harland, Marquardt, Harbron and others.

Mr. Winfield has set himself, and achieved successfully, an enormous task: nothing less than listing every British warship that floated during the Revolutionary and Napoleonic wars, with the addendum of the 1816 expedition against Algiers (the 1812-14 war with the United States fitting within this time frame). The larger ships are catalogued by rate and class; small unrated ships by type. Their designer, builder, dimensions, armament, cost and a concise history of their service, including their commanders, is given in every case and the same information is provided for captured ships. The amount of research necessary can be imagined, but the author has generously acknowledged the contributions of a large number of collaborators and previous publications, such as The Sailing Navy List by David Lyon.

The book is illustrated by small black and white reproductions of paintings showing identified ships, a number of elevations and lines plans and, in the case of some of the captured vessels, by examples of Beaugean’s superb drawings. What would normally be appendices are in the first part of the book along with the preface where they are, in fact, more useful. Among them is a concise chronology of the naval wars 1792 to 1817 which can be used in conjunction with the ship histories.

This book would appeal both to students of the naval wars of the period and to those fascinated by the statistical details of the ships. It could be very useful to writers of “cannon and cutlass” fiction – the successors to C. S. Forester, Patrick O’Brian, Alexander Kent et al. They could then place their heros in actual ships and actions (like Kent’s hero Bolitho) or make sure they were in imaginary but realistic ones (like O’Brian’s Jack Aubrey). The popularity of such novels has created a large population of knowledgeable enthusiasts who are prepared to discuss cross catharpins with Aubrey or box-hauling with Bolitho without ever having set foot on a wooden deck! For both writers and readers, books like this are a great help in placing the events of the period, real or even fictional, in perspective.

This review was originally published in ——